Monster Dark Spot Shows Up on the Sun Disc 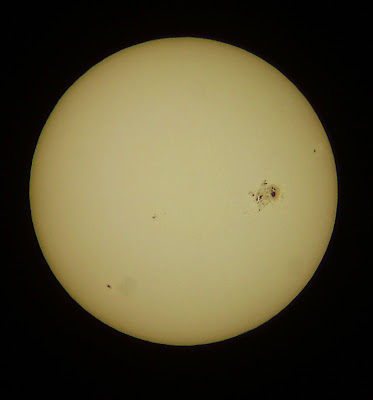 October, 21st : as it already happened some months ago, a huge dark spot appeared on the surface of the Sun, although this time we better call it a "monster" dark spot : it comes some 40.000km across (over 3 times the size of Earth), while the entire group to which it belongs, labelled AR2192, spans for over 150.000km...
In the last days this sunspot group came greater than the largest one of the previous solar cycle (that was on Oct. 30th, 2003), hence becoming the largest of such features to show up on the Sun disc in several decades.
This time also the sunspot can be seen with naked eyes, of course using a proper filter or specialized eclipse glasses. The group will remain visible until Oct. 28th. only, then disappearing through the Sun border but, as it keeps growing, it might be visible again by mid november, after completing the rotation of the Sun ! Photo: Cristian Valenzuela / Observatorio del Pangue - October 21st, 2014
Camera: Xperia J phone at prime focus of Orion 80mm refractor with white light filter
Enlaces a esta entrada
Enviar por correo electrónicoEscribe un blogCompartir con TwitterCompartir con FacebookCompartir en Pinterest

Last season our french astronomer Eric was at home again, and despite the dreadful weather conditions that characterized the local summertime this year, he succeeded to witness the close conjunction between the Moon and Saturn on August 31st (2014): actually it was the first clear night in weeks ! 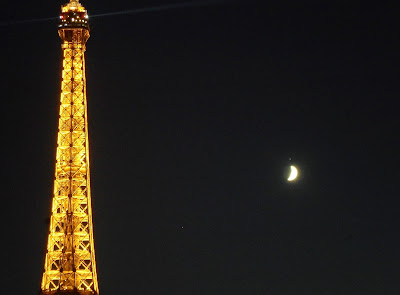 On the above picture you can distinguish the tiny spot of Saturn topping the Moon border, and also planet Mars much farther at lower left, half way to the Eiffel Tower.