The Great American Eclipse : we've been there !...

August 21st, 2017 : a total eclipse of the Sun crossed entirely the USA, from Pacific to Atlantic coasts, a rare circumstance that allowed it to be witnessed by hundreds of millions of people, making this the most widely watched eclipse in history.
And certainly, as that popular song says, we wanted to be in that number... Next we'll post full details of our successful trip to Boise, Idaho (still processing thousands of pictures...) but below is a preview image of the moment of totality, where subtle details of the Sun corona can be discerned. 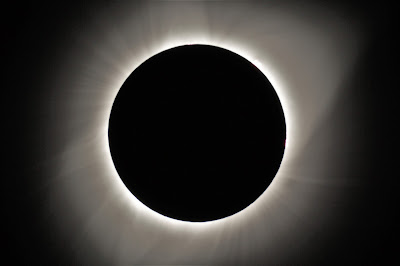