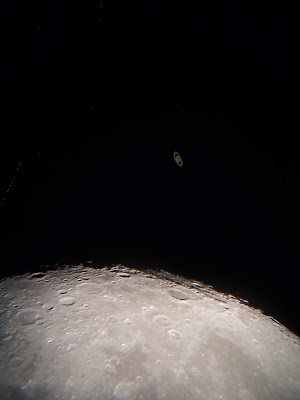 Beside the nice and unusual sights, it is rather impressive to imagine the contrasts involved in such an encounter. In the view above, the tiny Moon shows huge compared to the diminute, still giant, planet (about 40 times larger), while the discrepancy in distances is even greater: the Moon was almost 400.000 km away from us, while Saturn stood at some 1.400.000.000 of km !... Photos: Cristian Valenzuela/Observatorio del Pangue - June, 18th, 2019
Picture taken with smartphone...
Enviar por correo electrónicoEscribe un blogCompartir con TwitterCompartir con FacebookCompartir en Pinterest
Entradas más recientes Entradas antiguas Inicio
Suscribirse a: Entradas (Atom)