December the 1st : witnessing an outstanding event in the remote Universe...

Quasars use to be out of reach of amateur telescopes, however in the last days something exceptional happened in the constellation of Pegasus. Quasars are bright active galactic nuclei found in the youth of the Universe only, some kind of early stage in the life of galaxies, hence they are observable today as extremely remote objects. One of them, 4C 11.69 (also known as CTA 102), stands at some 8 billion light-years away (yes, 8,000 millions), being normally invisible except for the largest telescopes in the world. However, some days ago, it suddenly began to brighten until that night of December 1st, when it comes bright enough to be visible in medium size telescopes, or even in large binoculars ! Indeed, this is quite a special moment in the life of any astronomer, since CTA 102 became the brightest quasar ever recorded in history... Of course at Pangue we didn't miss the opportunity to watch such a remote celestial object, whose light is coming from times well before the birth of the Solar System... And of course we even succeeded to capture the phenomenon... The image below shows well what's happening. The quasar, located near the center of the field, is absolutely not a spectacular viewing: whithout the correct information you could easily miss it for a normal, anonymous faint star.
Still, this is the fascination: a quasar appearing just as a normal faint star !
The next image shows CTA 102, marked by the two white lines. Incidentally, note also the faint galaxy NGC7305, a small round smudge to its lower left. 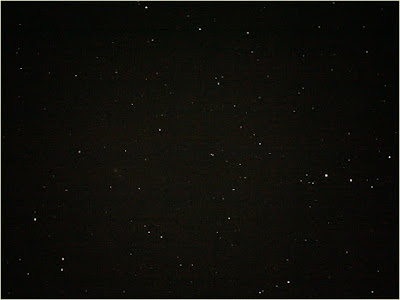 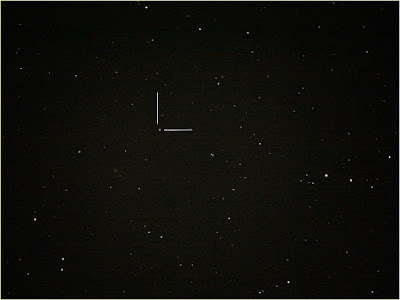 December the 1st : a distant supernova, as a bonus...

On the same night that we've been granted with the exceptional outburst of a quasar, an extragalactic supernova was also available in a well positioned galaxy, making two rare events visible at once !
And of course we also captured that one... A supernova is the explosion of a high mass star : the process is so powerful that the dying star comes extremely bright for a few days, sometimes outshining the whole galaxy ! By late November, supernova SN2016iae shown up in NGC1532, a galaxy in Eridanus that produced several more supernovae in the past. On the image below we can appreciate the tilted flat disk of the galaxy surrounding a bright nucleus : SN2016iae appears as a tiny star inmediately to its left (circled in the next image). Above the whole we can see also the small galaxy NGC1531. On that night the supernova was relatively faint (estimated magnitude 15.3), in principle requiring telescopes of 50cm in diameter, although the good local sky conditions allowed us to observe it effortless with a 40cm scope. 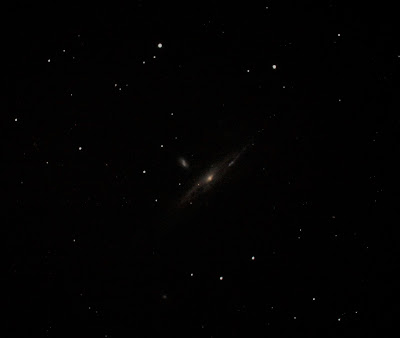 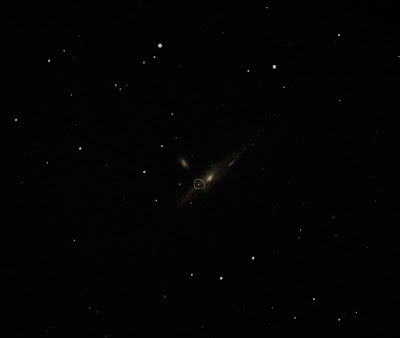 Incidentally, we can take advantage of such a "visit" to this pair of galaxies to appreciate some curious features, well shown in the close view below : NGC1532 (the main one) harbors two attached bright knots on the front edge of the disk (to the right side), while NGC1531 (the small one) actually appears to be made of two adjacent components... 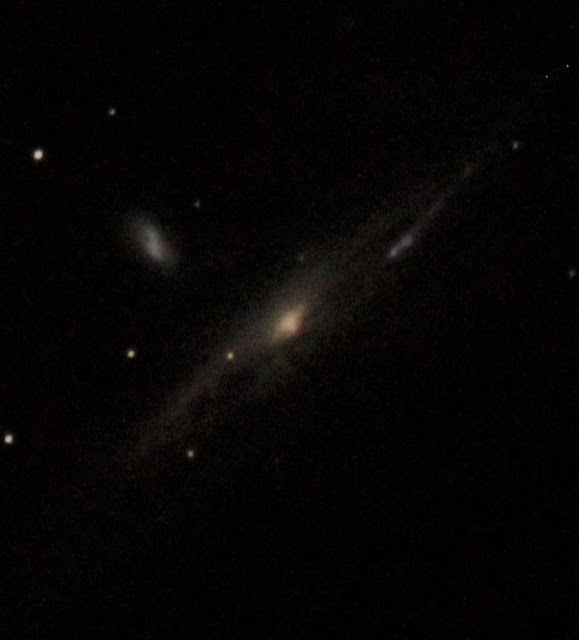