On that evening a mid-size asteroid labelled 2004 BL86 approached at some 1,200,000 km from Earth, that is roughly 3 times the distance to the Moon. Such events are (fortunately) extremely rare, and they use to provide a nice spectacle to advanced stargazers.
And indeed it was amazing : not only the asteroid was bright enough to be seen with medium to large telescopes (although a deeply detailed chart was necessary to correctly identify it...) but its motion throurough the stars can be appreciated in real time ! 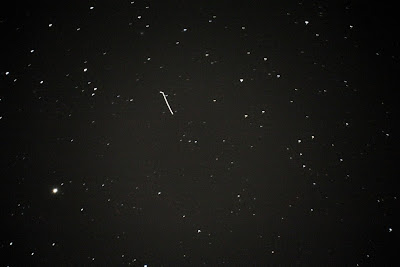 On the above picture, taken in Cancer (not far from the star cluster M44) we can see the short trail left by the object, corresponding to a displacement of over 3 arcmin. performed in 90 seconds only ! That corresponds to covering the apparent size of the Moon in less than 15 minutes...
Photo: Cristian Valenzuela (Observatorio del Pangue) - January, 26th, 2015
Camera: Canon EOS 60D, exp: 90 sec.
Enviar por correo electrónicoEscribe un blogCompartir con TwitterCompartir con FacebookCompartir en Pinterest
Entrada más reciente Entrada antigua Inicio