The Moon wasn't the only celestial body supposed to pass right in front of the Sun this year : a transit of the planet Mercury was scheduled for that morning of November 11th, visible from all the Americas, and certainly we didn't miss such an opportunity to witness one more rare event. The picture below shows the greatest moment of the phenomenon, that is when Mercury stands at its closest from the centre of the solar disk : can you glimpse that tiny dark spot, almost perfectly centered on the Sun ? If you do, compare the apparent size of the planet (10 arcsec.) with that of the Sun, almost 200 times greater. Note also that the solar surface is completely free of sunspots, as it has been for the last two years, indeed a very unusual circumstance that maybe helps to make Mercury appear a little bit more relevant ! 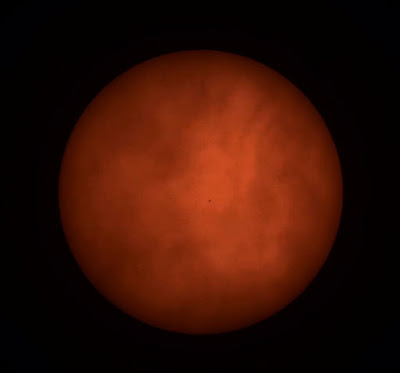 The darker areas faintly visible all over the solar disk are not actual features, but only some thin clouds crossing through our own atmosphere. Still the sky was clear enough to allow to watch the entire phenomenon. Let's hope that the next transit of Mercury will have good weather as well.
That will be in November 2032... Photos: Cristian Valenzuela/Observatorio del Pangue
Camera: Canon EOS 60D, at prime focus of 80mm refractor at f/11
Enviar por correo electrónicoEscribe un blogCompartir con TwitterCompartir con FacebookCompartir en Pinterest
Entrada más reciente Entrada antigua Inicio