We missed the last two events : in 1226, the telescope had not yet been invented, and in 1623, the event was not well visible from Europe, so despite his brand new telescope, Galileo missed it too... But on December 21st, 2020, the entire world was allowed to watch the phenomenon : Jupiter and Saturn approached each other in the celestial sphere, standing at a mere 6 arcminutes apart. For comparison, the apparent diameter of the Moon disk is 30 arcminutes.
Visually, it was great to watch both planets so closed together (although not merging as some stated...), but the spectacle was much more impressive through the eyepiece of a telescope, watching those two giant globes gently "floating" together, while remembering that Saturn is actually twice as distant as Jupiter...
Here are some of the pictures we took (click on them to enlarge) December, 20th (the day before) : main view already showing the two planets very close together. The tiny dome on the top of the mountain is the Cerro Tololo Interamerican Observatory (CTIO) : 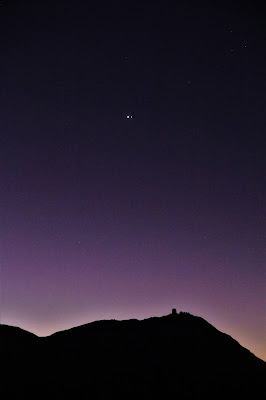 Deep zoom of the above view, even showing some Jupiter moons : that is almost the impression we could get through powerful binoculars : 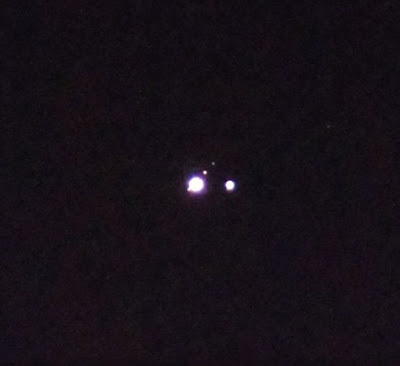 Telescopic view of the scene, with the globes of Jupiter and Saturn standing close each other, at some 8 arcmin. apart : 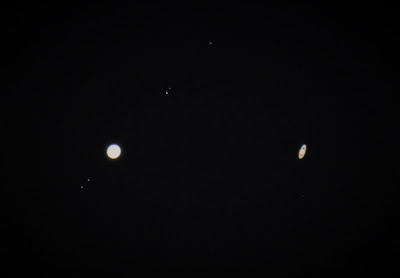 Same view as above but overexposed, hence showing the many moons involved. Left of Jupiter is Europa and Io, and right of Jupiter is Ganymedes, then Callisto in the far (highest dot). Note also a tiny dot very close to Ganymedes and slightly fainter, this is a field star (HIP91334), by coincidence in conjunction with that jovian moon (yes, we got a conjunction within a conjunction !...) Then, below Saturn is Titan, and above the planet (slightly to the right) is Rhéa. It's interesting to notice that Callisto appears closer to Saturn than to Jupiter ! 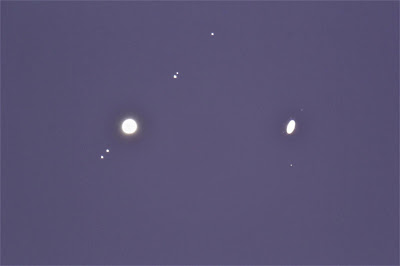 December 21st, that's the great day, with Jupiter and Saturn at their closest approach (6 arcmin.) : can you still distinguish them ? If you don't, well you're just enjoying the phenomenon... 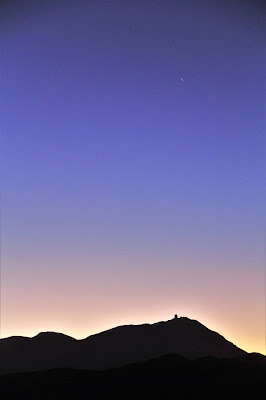 Telescopic view, just as the previous day but ...closer ! 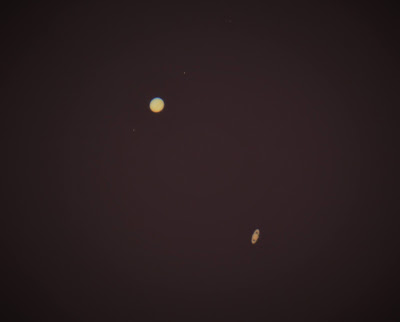 For whose who missed the phenomenon, don't worry : you'll not have to wait 400 years for the next event, as another conjunction will occur as soon as in ...december 2080 ! Photos: Cristian Valenzuela / Observatorio del Pangue
Enviar por correo electrónicoEscribe un blogCompartir con TwitterCompartir con FacebookCompartir en Pinterest
Entrada más reciente Entrada antigua Inicio