It is a tradition by now, every year on the evening of February the 8th, we capture the sunset happening right behind the main dome of the Cerro Tololo Interamerican Observatory (CTIO), as viewed from our own telescope.
From year to year however there is a little shift due to the slight discrepancy between the civilian calendar of 365 days and the Sun cycle (roughly 365.25 days), something that we easily fix by adding 1 day every 4 years. This effect is appreciable if you compare the current picture with the ones taken at the same date and time on the past years (see our older posts...) showing the Sun disk a little bit more to the right (northward) of the dome. 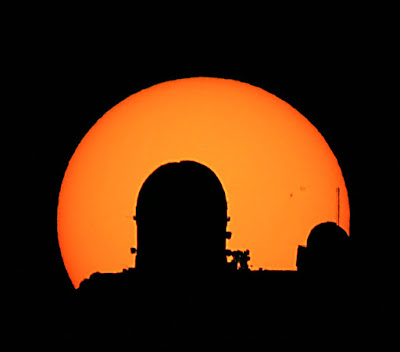 Photo: Cristian Valenzuela/Observatorio del Pangue - February, 8th, 2016.
Camera: Canon EOS 60D at prime focus of TechnoSky 80mm f/4.1 refractor telescope;
This year we managed to take also a view on the day before (the 7th), when the Sun still sets behind the CTIO but southward, putting the border of the main dome on the right limb of the disk. Not a perfect alignment, but a nice vista anyway... 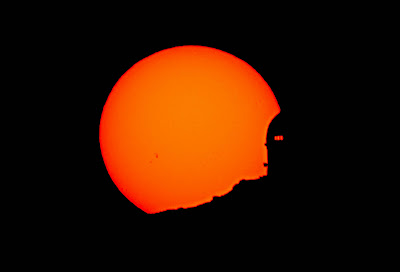