Astrophotography at Pangue :
More from the Large Magellanic Cloud

Much less known than its prestigious neighbour the Tarantula, the complex of nebulosities around the Bean Nebula remains a stunning view through large telescopes. On the below picture the Bean itself (namely NGC1763) is the brightest patch in centre of field, but we can identify several more components such as NGC1769 (to the left), smaller and still very dense, and NGC1760 (bottom left of field), fainter and crescent shaped, all three nebulae surrounding the rich star cluster NGC1761. Topping the complex is NGC1773, a tiny round patch involving a few bright stars. All these structures are part of a large, extended nebular region, actually much greater than the Tarantula itself. 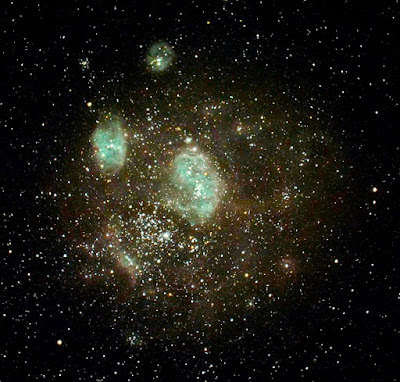